There is a museum in Nice which is pure Matisse. Its a mixture of modern and 18th Century villa.

I looked him up.

Henri Matisse was born in 1869, the year the Cutty Sark was launched. The year he died, 1954, the first hydrogen bomb exploded at Bikini Atoll. Not only did he live on, literally, from one world into another; he lived through some of the most traumatic political events in recorded history, the worst wars, the greatest slaughters, the most demented rivalries of ideology, without, it seems, turning a hair. Matisse never made a didactic painting or signed a manifesto, and there is scarcely one reference to a political event - let alone an expression of political opinion - to be found anywhere in his writings. Perhaps Matisse did suffer from fear and loathing like the rest of us, but there is no trace of them in his work. "His studio was a world within the world: a place of equilibrium that, for sixty continuous years, produced images of comfort, refuge, and balanced satisfaction. Nowhere in Matisse's work does one feel a trace of the alienation and conflict which modernism, the mirror of our century, has so often reflected. His paintings are the equivalent to that ideal place, scaled away from the assaults and erosions of history. "


In 1917 he moved, more or less permanently, to the South of France. "In order to paint my pictures," he remarked, "I need to remain for several days in the same state of mind, and I do not find this in any atmosphere but that of the Côte d'Azur." He found a vast apartment in a white Edwardian wedding cake above Nice, the Hótel Regina. This was the Great Indoors, whose elements appear in painting after painting: the wrought-iron balcony, the strip of blue Mediterranean sky, the palm, the shutters. Matisse once said that he wanted his art to have the effect of a good armchair on a tired businessman. In the 1960s, when we all believed art could still change the world, this seemed a limited aim, but in fact one can only admire Matisse's common sense. He, at least, was under no illusions about his audience. He knew that an educated bourgeoisie was the only audience advanced art could claim, and history has shown him right..."
("The Shock of the New", by Robert Hughes)
Hmm.

If you're interested in reading further about Matisse and looking at some of his work, a good place to start is the art encyclopedia online.

There is also a musuem dedicated to Chagall.

The Marc Chagall Biblical Museum nestles on the ancient hill of Cimiez in Nice, almost hidden by a garden of Mediterranean trees and plants. We gazed at the largest collection of Chagall’s works in any permanent collection, thanks to the artist himself, and his wife Valentina, who donated a large number of works to the State, including 17 large paintings on Biblical subjects, which gave the museum its name.

The museum also has two works specially created by Chagall to fit into the building: the stained glass windows in the concert room and the mosaic above the pond. Amazing.

There was a dear little self-portrait that caught my eye. 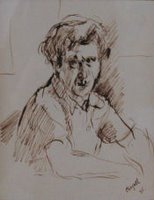 Quite un-pretentious and somehow sweet. It reminded me of my grandfather's drawing.

Of course, no trip to Nice would have been complete without what ended up being a whistle-stop tour of the Museum of Modern & Contemporary Art.

This is one hell of a building. Everywhere you looked there were amazing scuptures, installations and staggering architecture.

This is a Calder.

Surrounded by art, you feel compelled to attempt 'arty' with your photography. I'm not sure I can pull it off so I'll stick to straightforward snapshots.....

This is an Arman. He fills spaces with chairs. You have to squint a bit to see them in this photo.

The staircase inside led all the way to the roof where you could step across walkways from one side of the building to the next. And you were treated to a fantastic view of Nice.

Do you see the incongruous looking grey block on the left hand side? Its a library. Three sides are solid concrete and the fourth side hidden from view is glass.

I want to go back to this place.....we ran out of time and the security guards were kicking us out. I barely had time to go "oooh look, a Warhol" and "hey, isn't that a Klein?" and never mind the bits in between. I shall return one day I hope. 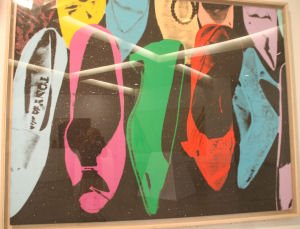 Well. Thats the culture bit done then. Now for shopping. And no ordinary shopping.

We spent an afternoon being one of those that shopped in Cannes. Which in itself is a kind of art form since it appears to involve much sunglasses wearing, designer handbag toting, customised mercedes dodging, trying to look like someone famous-posturing scramble for something outrageously priced. 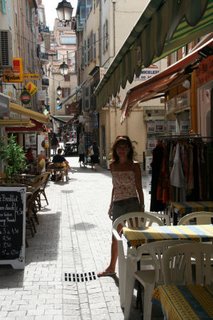 Ilona, Anya and myself headed off for the cheapy boutiques in the side streets. Many bargains to be found.

The french have such effortless style. Even the cheap shops were chic. Dunno how they manage it. Us Brits can't, thats for sure.

I love mooching about places like this. The side-alleys and unexpected little squares surrounded by intriguing little boutiques and bathed in sunshine. 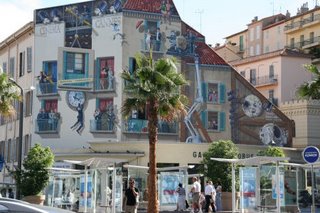 Trying to find our way to the waterfront we stumbled across this: my attempts at photography don't really do this justice, but the side of the building is flat. The trees are very realistic don't you think? (Wink wink)

Back to Nice again on the way back from Cannes. Apparently, THE place to stay is the Negresco. 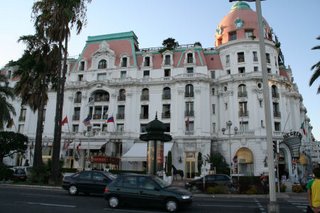 The Negresco is quite literally a palace. The owner has amassed an exceptional collection of paintings, antique furniture and rare object d’art that you can admire in the public rooms, guestrooms and corridors of the hotel. Five centuries of art and history rub shoulders: from the classical and historical paintings of the royal portraits in the Salon Louis XIV and Salon Royal to such contemporary artists as Moretti, Dali, and Nike de Saint-Phalle… 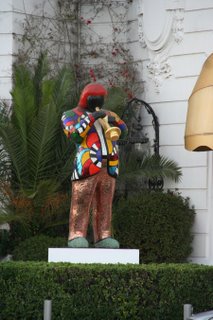 I liked the statue on the front lawn. I had to take this photo from across two pavements, a boardwalk, a cycle-cum-kamikaze roller-blading pathway and six lanes of very fast-moving french traffic.

Of course, no trip to the Cote d'Azur can be complete without the obligatory beach photos so here you are......

The time had come to rest some extremely weary feet. We found a little street, still in sunshine, and kicked off dusty flip-flops, sipped some ice-cold vin blanc and contemplated the hustle bustle passing us by. Thats better. 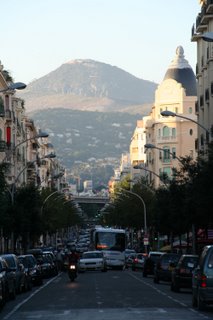 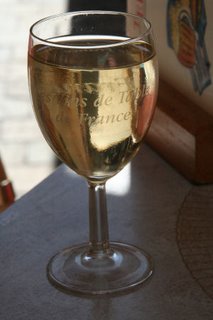 Great to catch up on another installement Sue - without trying to knock our own beautiful little country I do have to agree with the style and chicness of the south of France but hey, a visit certainly inspires and perhaps if became everyday humdrum chic it would not have the same effect? Just a thought. On little question/request, I have no link or tie in with the arts yet have had my interest pricked by your blog - am intreagued by the "armchair to a tired businessman" analogy for the Matisse paintings. Am being very lazy yet would love some links to sites that I can possibly have a look at some of Matisse's paintings? Keep blogging Sue and thanks in anticipation for the help.

Hello again. Thanks for your suggestion. I've added a link to the art encyclopedia online where you can look up images and information on Matisse. Happy browsng!!

I am quite exhausted just reading this! What a day - looks wonderful though, I am not a big Chagall fan, but he does suit stained glass very well.

Just catching up with your blog and I can see how that sketch reminded you of your grandfather's picture... it's almost like you were meant to see it...

Glad you had a good trip

Oh gosh Elaine..I wish I'd seen this reply earlier. What a sweet and lovely thing to say. I felt the same way too....it was almost like I was destined for the trip and to visit all the places he had so longed to see and had told me about.

I hope he was perched on my shoulder as we were going around. I would have liked that.