Technology is only a wonderful thing when it works. For the past nearly 3 weeks I have had a laptop that has only worked when it felt like it, emails going to places I never knew existed, and a well known photo program which either crashed every time I tried to save an image, or saved it at such low resolution (unbeknown to me) that I have been inadvertently horrifying my clients when I've been sending them pictures for their approval. Not good.

So I have resorted to threatening the wretched lump of plastic and wire with being chucked out the window and lo and behold it is behaving this morning so while it's in a cooperative mood I can catch up with some news.

First off...I want to say a big big thank you to Em at www.10000beads.blogspot.com
Em is a fellow SOSF member and she kindly sent me these which arrived just in time for my birthday. 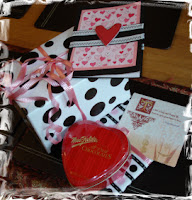 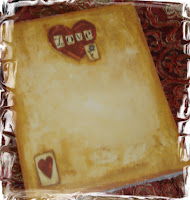 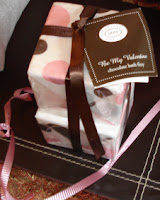 The theme was chocolate and I was lucky enough to get my very own little tin of chocs plus some lovely notepaper and some chocolate bath bombs which smell divine. So divine in fact I had to confiscate one from my 3 -year old who I noticed was foaming at the mouth shortly after disappearing with the parcel while I was putting away my camera. O joys of motherhood.

Its such a lift to a glum February day when an unexpected parcel arrives at your door and the SOSF is all about the spirit of friendship rather than the simple exchange of gifts. Makes you realise what are the more important things in life, and brown paper packages tied up with string are far far better than getting a daily dose of spam messages anyday.

Completely changing the subject, I have just had some rather exciting news and an idea for a project that anyone interested can join in with. I'll post more info soon. If my laptop lets me that is.
Posted by SueC at 10:29 AM

Hurrah indeed...... glad you are back. Thought that perhaps you were just bumbling around at home, putting your feet up enjoying the peace and quite waiting for Spring to sprung...he,he!! Technology eh, what a pain...wondered if you have thought about low res painting just in case gremlins strike again!? :-)

I'm glad you got the package safely. The thought of a chocolate-scented bath sounds a bit wonderful, if decadent, doesn't it? It was fun putting your package together. :)

Your sosf gift sounds wonderful, I know mine was, and i didnt even join this time, just had a suprise gift, I am so lucky!

Glad to hear your tech difficulties are sorted now, suprising how much we rely on the internet/computer nowdays.

Welcome back, it's so tiresome when computers misbehave. :)Good parcel! I can just imagine 'someone' frothing at the mouth...

Hi, Sue! Bath bombs sound interesting...never tried one but I'll have to. Thanks for stopping by my blog the other day. I haven't updated much because I'm waiting to scan some more of my fabric pages.