May Day May Day 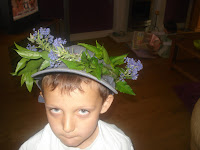 I had tears of laughter rolling down my face this morning. I was running late and frantically trying to make James' hat for his school May Day parade and dancing today. Its an annual occasion.

Forgoing toast I raided the studio for bits of wire and tape and fashioned some verberis and forsythia around his beloved nike cap....

Proudly putting it on his head and turning him so he could see his reflection in the cooker, his look of disdain cut like a knife.

Email ThisBlogThis!Share to TwitterShare to FacebookShare to Pinterest
Labels: hat, May Day

My now adult son speaks with fondness of the hats but tended to look humiliated at the time.

Speaking as the only other boy in this conversation who was also made to wear silly hats by his mother…James has my sympathies :)

Lorna - I don't suppose you can find out if there are any photos of Graham in his May Day best? 8-)

We need his Mums phone number.....

ahhh ... i know where she lives

I’ve always known this would end up with you all ganging up on me….;)