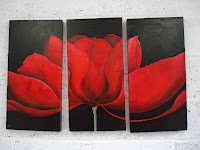 First of all. Those paintings got shipped today. I had to get up really early to wrap them up and kiss them goodbye.
These two triptychs are by far the most popular I've sold, so I'm considering having some limited edition prints made ......another thing for the to do list. 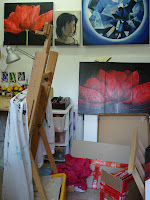 Top of the list has to be tidy the studio up after dancing around two nights solid....crisp wrappers and plates that once held toast are beginning to stack up. I should really be getting on with that instead of blogging (or as in the case of tomorrow - going out for latin food).

However, I have spent the day not entirely unproductively, as I unearthed a little treasure that I had long forgotten I had. Can you tell what this is? 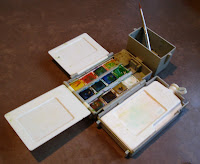 Its a Cotman Field Box. It opens up and unfolds to reveal 12 paint tablets, a sponge, palettes for mixing, a water container, and a flask for carrying water. And a gorgeously cute brush that unscrews and fastens into its own handle. So I am decided. This summer I am off on expeditions to paint outdoors again. I used to paint in water colour many years ago, mainly dabbling. And rediscovering this set has inspired me to get back in touch with that side of my painting.

Lucy on the other hand, has lately been talking photographs with me and inspired me to dig out some 80's photos (it all started from a discussion about Dusty Springfield and panda eyes...). For some bizarre and sentimental reason I kept my old Uni cards from when I was at Manchester in the early 80's. There is one for every year. When I began in 1982, I was fresh of face, had never tried cider, nor gone to a jazz funk disco. By my third year (which I think you'll agree from the photos) I was a veteran of the Hacienda. Don't know if you can call that decline or development? You choose. 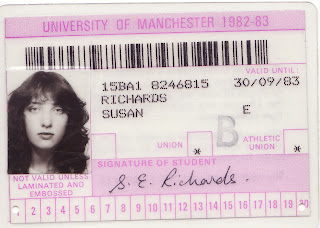 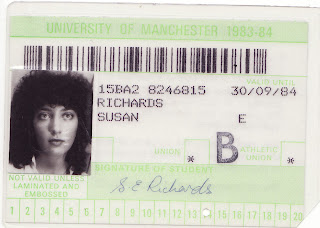 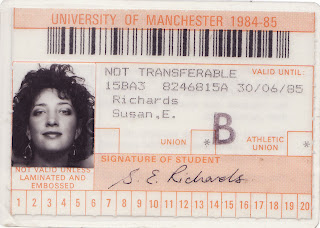 Either way, they are a shocking example of how bad hair do's were for the decade.

The triptychs add an extra dimension to the paintings don’t they…have you done any with other layouts eg a block of four…or perhaps you could do a Hockney and have 50 huge canvases filling a wall :) Hope you do some kind of print version of these, I think they’d work really well :)

Can’t wait to see what you do “out in the fields” with your watercolours. Nice Uni photos…thank goodness there are no pictures of me with strange haircuts…;)