I know how irksome it can be to have to look through someone else's holiday snaps but bear with me because I'd like to share these. They have seeded some ideas for new work which I hope to be starting very soon.
I spent 2 weeks on Zakynthos (Zante) with the family at a tiny fishing hamlet of Tragaki, a few km from Tsilivi.

In the days when the island was ruled by the Venetians, they referred to it as Zante fior di Levante, which translated into English becomes Zakynthos, flower of the Levant.
The island is home to masses and masses of olive groves and hillsides ablaze with different coloured and exotic blooms. 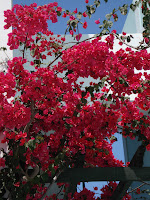 Some of the trees are hundreds of years old and each family owns a few and harvest the olives to press and make their own olive oil. We bought a bottle back (liquid green in a 2 litre water bottle). Two litres will last us a few months, one of the locals we befriended remarked that they get through 400 litres in a year.! No wonder they have so many trees. 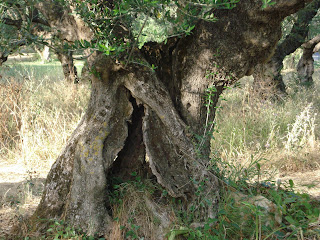 The light here makes every colour really spring to life. The greens, blues and pinks. Must be something about Southern Europe. 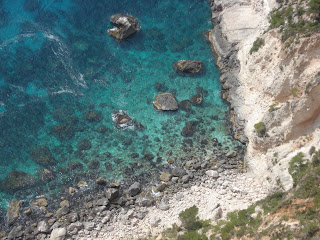 The island is also home to the rare loggerhead sea turtle (Caretta caretta). Sadly the population is down to a few hundred. At night volunteers attempt to rescue the eggs, when the turtles come ashore to lay whimsically amongst the abandoned sandcastles, beach umbrellas and forgotton buckets and spades.
Here is the beach at Gerakis, which is a nesting site so human beach activity is strictly restricted to 10 m within the shore. 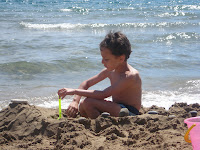 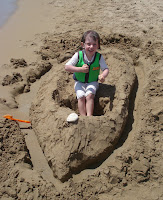 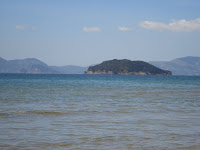 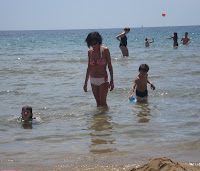 Measure have been taken by the local authorities and volunteer groups to protect the species, but much work is still needed. 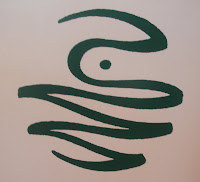 The legendary strength of the sea turtle is central to the creation mythology of many peoples, who believed that if the turtle disappeared, the world would end. This ancient Mayan symbol depicts the turtle swimming in the world's infinite sea to eternally separate earth from sky.


Spending time on the beach prompted me to have a go at some sand sculpture, since I am a kid at heart and messing around on beaches was very restful to my troubled soul.
I recruited what child labour I could.... 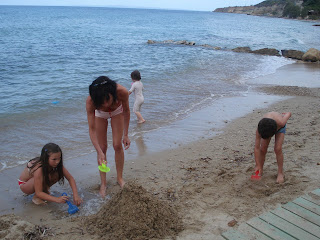 And here is the finished result....a five foot Caretta caretta.... 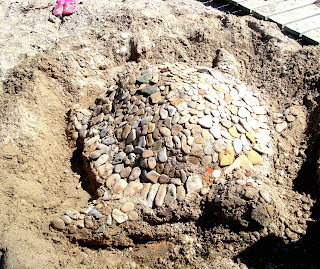 I also left a mermaid on Gerakis beach.....to watch over the turtles. 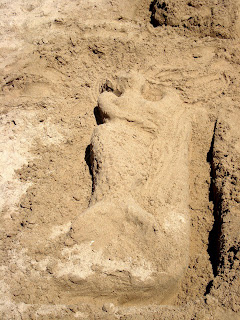 Sadly the photos aren't very clear, but I hope you get the general idea.

Of course, no holiday is complete without humongous sized G & Ts from a friendly barman. 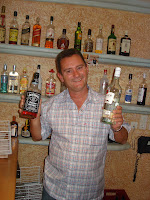 Barman and friend at the Maistrali Hotel where we stayed. He kept me and Maddy topped up with Ouzo and chocolate ice cream!! 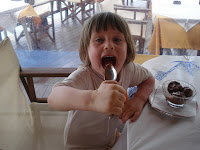 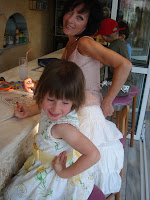 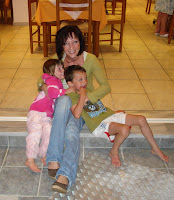 Glad you are home ... see you in the Queens.

Sue - this looks fantastic. I'd forgotten how beautiful the sea is in that part of the world.

If I ever have a tatoo I think I'll have the turtle symbol.

Really looking foward to seeing how this translates into yout work.

S'funny you should say that...I was thinking exactly the same about a tattoo, I thought I might get a henna version next time I'm in Oxford.