Couldn't resist. Sorry. My son is a huge Star Wars fan and there aren't many things that make me laugh out loud. I thought I would share...

More throughts on the RA, shagging zebras and barbed wire?

Interested? Read on
Posted by SueC at 2:54 PM No comments:

Kicked out the RA (again) 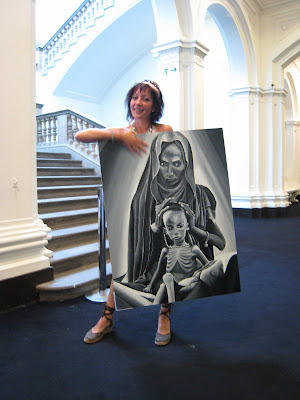 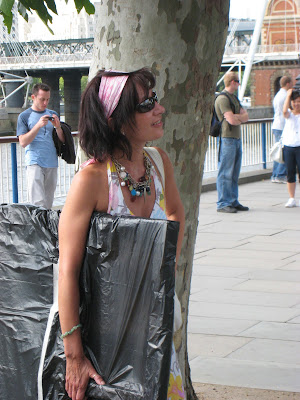 Yet another Summer Exhibition rejection. Luckily the sun was out because lugging a 4 foot by 3 foot canvas across London ain't pretty.
Posted by SueC at 1:54 PM 5 comments:

The Secret Life of Cows

I went to Liverpool this weekend, with a friend to visit her artist brother, John Boardman, aka Darkly. He is genius. Please go look around his website at his work, this is just one example. He also writes poetry and holds forth at Stamps Bar (you may even spot him on the bar webcam here, he always sits by the window behind the stairs). I am saving up for one of his paintings and his posters are for sale at modest prices.
Posted by SueC at 7:59 PM No comments:

I am just finishing off Girl in Pink Bandana and I've decided to extend the slightly flapper-ish theme. 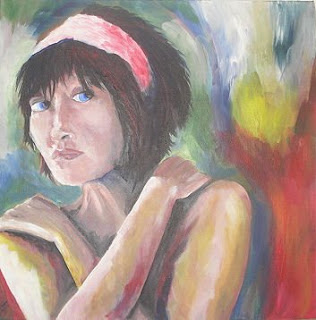 Getting models and poses for a composition is always a bit of an exercise so I have been looking at some royalty free images for inspiration.
I found this. Its a young 1920s girl 'dressing up' and I will be using this as the base for the next painting. I am really exciting by these ideas. 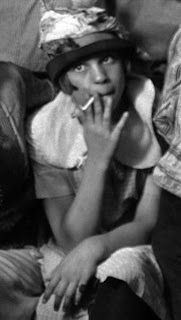 It combines my love of vibrant colour with some interesting composition. I just hope I don't get vilified for showing a child smoking. Its my intention to represent how children mimic.
Posted by SueC at 11:09 AM 3 comments:

Email ThisBlogThis!Share to TwitterShare to FacebookShare to Pinterest
Labels: Dressing Up, Girl in Pink Bandana 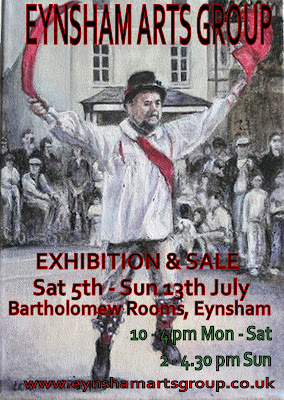 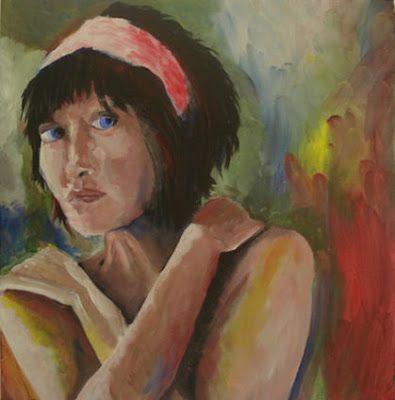 Did some more on this portrait this morning. Its 'step away from the canvas' time for now until the piant has dried. I really am enjoying this style of painting.
Posted by SueC at 10:28 AM 7 comments:

Email ThisBlogThis!Share to TwitterShare to FacebookShare to Pinterest
Labels: portrait

New groove and no boundaries

What with one thing and another, I haven't spent any proper time in the studio over the past month. Today I returned to a new idea I have been brewing for a while. Following on from the 'Man Made' composition for the RA Summer Exhibition, I thought I would continue the style with a portrait using bright colours rather than monochrome.
This is the result of this morning's efforts. A canvas 16 x 16 inches square.
All I have done is cover the canvas in paint to give me a base to work from. My idea is to have a girl embracing herself yet staring intently outward. A way to go yet, but I am pleased with some of the effects and can almost see where this one is going. 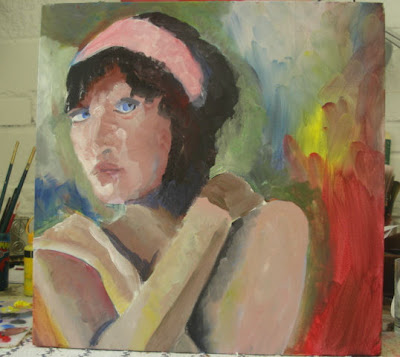 Getting paint down like this lets you see where you need to make changes. Much easier that trying to paint each little part exactly as you go along. It also allows for much free-er brush strokes and carte blanch (or in my case palette blanche) where colour is concerned.

Wherever possible, I prefer not to draw out my paintings beforehand. And this is an example. Drawing with paint from the inside out is something I learned a while back and, for me at least, allows much more freedom of expression than trying to 'paint within the lines'.
Posted by SueC at 12:23 PM 2 comments:

I won't bore you with endless photos of beach shots. Suffice to say we went to Maistrali in Tragaki, the same place as last year and it was truly fantastic. I picked out a few that capture the holiday pretty well. 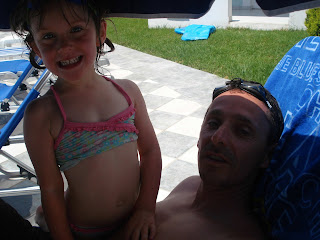 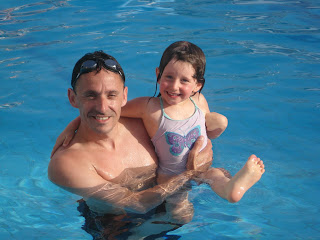 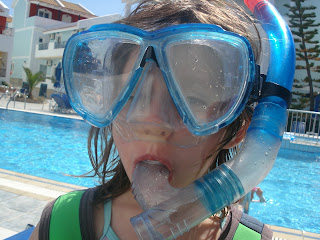 Rumour was there were sharks in the pool.... 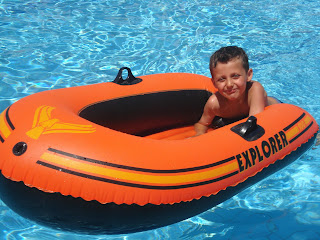 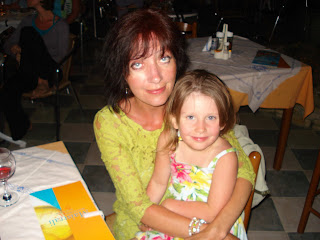 No holiday at Maistrali is complete with out some Greek night dancing. M joined in with far more enthusiasm than most, but I have to admit it was great fun once you got going.... 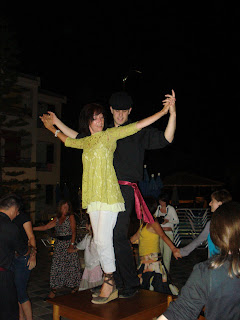 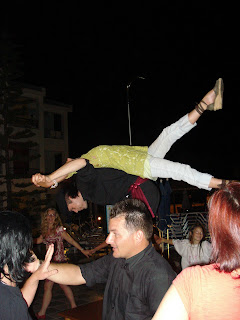 We hired a jeep for the day to explore a bit and visit the turtle (caretta-caretta) nesting beach at Gerakis. We decided it would be fun to try and find "that restaurant we went to last year" which is perched on top of one of the mountains. Picking one, we proceeded to drive up very steep inclines and when I observed that the road was more goat track than anything we drew to a halt. It was then I looked out the side window to see these...accompanied by gathering angry bees... 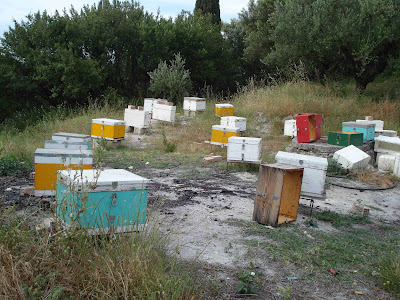 Zakynthos is famous (and rightly so) for its gorgeous honey but we didn't wait around and after what seemed like a 90-point turn on a road barely wider than the jeep with a 1000ft drop on one side, we made off in a cloud of dust.

We eventually found the restaurant, in Gerakari. This taverna sits at the top of the mountain, in the highest point of the village overlooking the island. The terrace where you eat is a balcony which is built so that you have a panoramic view of the island. I think the owner must be keen on flowers and crochet.... 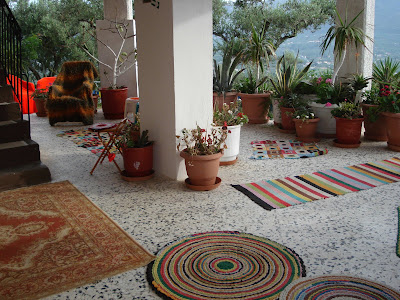 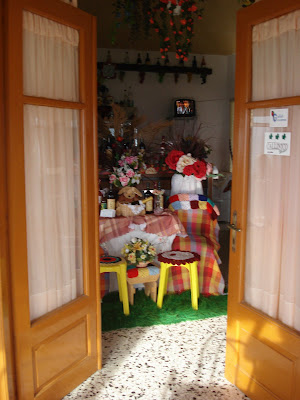 In the beautiful gardens I came across this fellow... 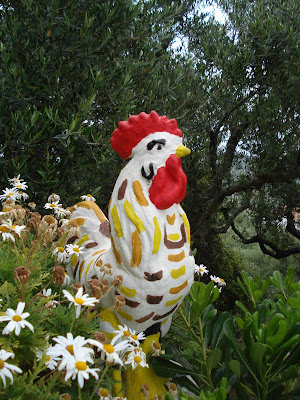 And for once, clean and fed (at the same time rather than one or the other) children. Yammas! 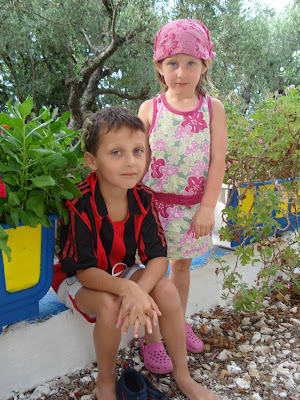 Thank you to everyone who gave their support and sponsorship for Race for Life. I managed a respectable 35 mins for 5k. (Not bad considering I had just got back from a fortnight's "training" consisting largely of ouzo and greek meatballs).
Here I am pictured before the race, with my friend MissT. 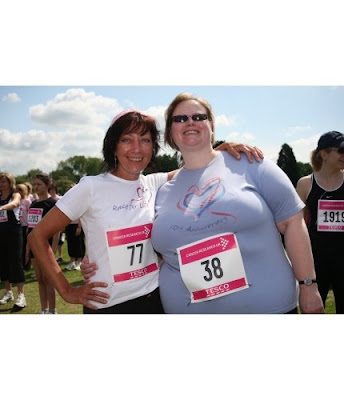